Lynne trained as an opera singer at the Royal Academy of Music, but it was her successful modelling career that took her along a different path.

She became involved in the Grand Prix racing circuit where she married Formula 1 driver Jackie Oliver, who won Le Mans in 1969.
She was witness to many fatal accidents at this time, losing close friends in horrendous accidents.

The exciting and glamorous lifestyle was accompanied by a constant fear of loss, causing great emotional stress. Knowing the profound effects emotional stress can have on the physical body gave her a unique level of understanding of her own physical setbacks over the years.

While living in California, Lynne took up yoga and has now been studying, practicing and teaching  for 30 years.

Her second marriage, to guitarist Bruce Welch of The Shadows, was dissolved in 1989.

Among her other attributes, Lynne is also a member of the International Association of Yoga Therapists, a qualified aquarobics instructor and has a degree in anatomy and physiology. Lynne qualified is an NLP practitioner, having completed her training at the Harley Medical Centre in London, W1.

Lynne was first introduced to yoga when living in California in the 70’s, at a time when yoga was not as widely popular as it is today.
With a training in Hatha Yoga, she did not start teaching until much later, when becoming increasingly aware that there was more to yoga than just performing the physical postures.
Hungry for more knowledge and in search of the “truth,” she attended many teacher seminars from different schools of yoga.

A big shift came in the early 90’s when she was introduced to Gary Kraftsow and the Viniyoga method of teaching.
This was to finally change her direction with an awakening of the true philosophy of this ancient practice. This personal cathartic spiritual awakening came at a time of challenging stress – the death of her mother, the breakdown of her marriage, major surgery, and more!
Although friends were supportive, the search for a deeper understanding of suffering came from yoga and being involved with wonderful teachers who were truly inspirational.

Lynne continues to pursue her learning by attending as many seminars as she can, mainly in the USA where the I.A.Y.T. is based. Now running a retreat in the Canary Islands, Lynne teaches one-on-one yoga and small group sessions. She intends to travel more in the next year to the USA and Hawaii, where she has many close connections, and is available for weekend and one-day workshops in London.

Through the power of regular yoga practice, Lynne has observed that people gain an understanding of their particular situations, have more clarity and discover these invaluable techniques to deal with their challenges.

With new learned skills to manage the stresses of life this is a holiday that  can make a profound difference to your life, both physically and mentally. 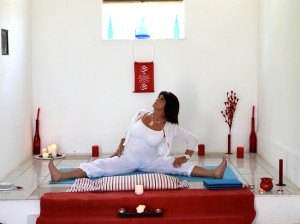 Please check out my publicity shots available on my Press Archive page.